GRAND OPENING OF THE IRCAD 2 FACILITIES 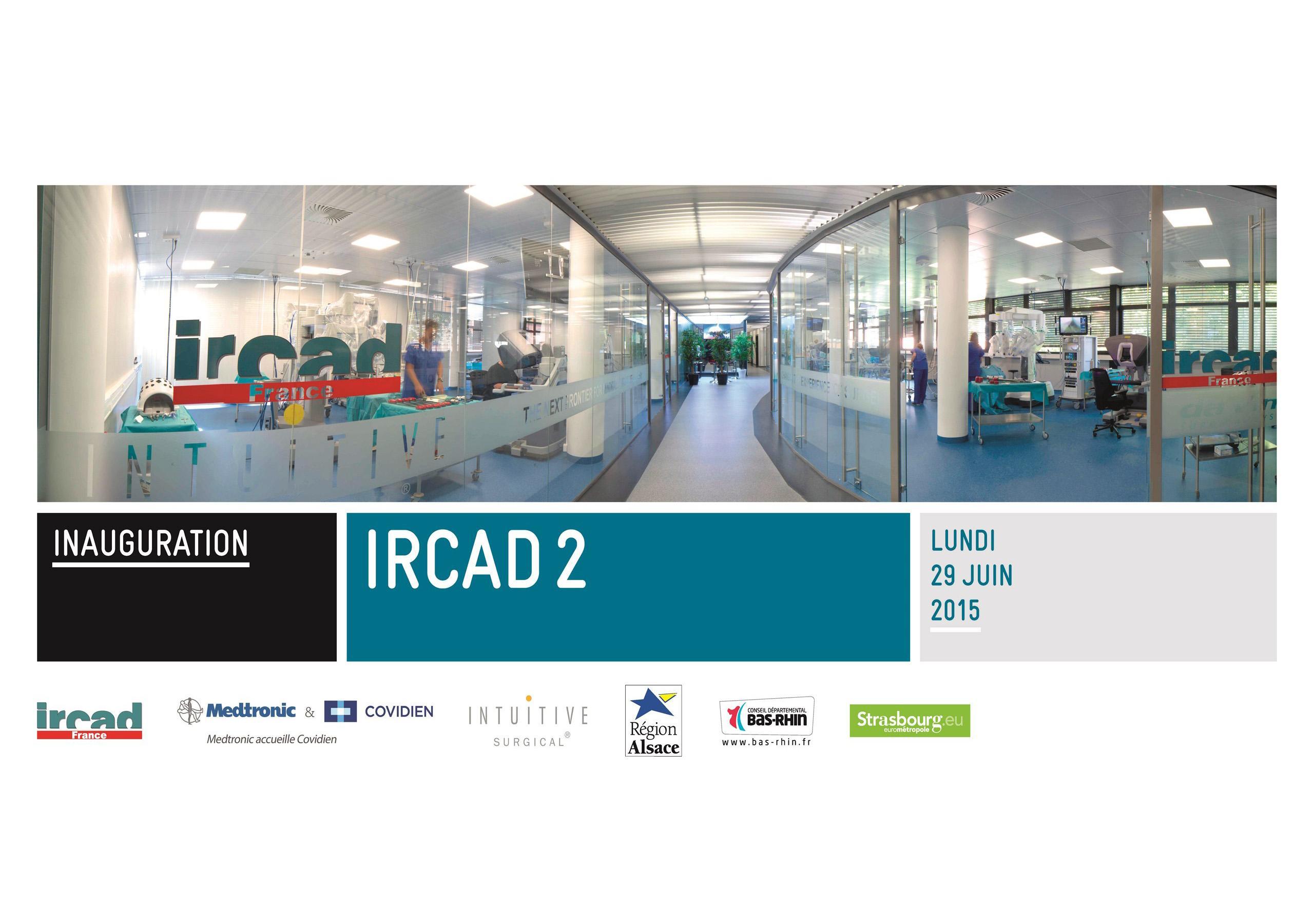 Every year, the IRCAD, Research Institute Against Digestive Cancer, sees activity in the training field of minimal access surgery rise sharply. In 2014, 5,000 surgeons originating from 116 different countries came to the IRCAD to receive training. In 2013, 4,500 surgeons were trained at the institute. To meet this rapid growth in educational demand, a second platform dedicated to teaching and experimental surgery was opened, and the IRCAD 2, a new facility, was created. For a couple of months now, the Institute’s facility has hosted Medtronic and Intuitive Surgical, two international juggernauts of the surgical Industry, on 4 floors.

In order to strengthen its links with Covidien (now part of Medtronic), a historical partner of the Institute since its creation in 1994, three floors of the IRCAD 2 facility were provided to Medtronic by the IRCAD. As a result, Medtronic delocalized its European training facilities for sales and marketing teams from Elancourt (Yvelines) to Strasbourg. Over 4,500 days of training were delivered at the IRCAD 2 facility between May 2014 and May 2015, hence allowing Medtronic partners to enhance their training in close contact with healthcare professionals on the IRCAD campus.

Intuitive Surgical, an American company which is the world’s leader in robot-assisted minimally invasive surgery, decided to establish its largest European training center on a floor of the IRCAD 2 facility. The objective was to give surgeons in training at the Institute the opportunity to use the da Vinci™ robotic systems. As an airframe manufacturer has to organize the training of pilots on new aircrafts, Intuitive Surgical benefits from the IRCAD’s academic environment to train surgeons to new robotically assisted surgical technologies. Six da Vinci™ robotic surgical systems, equipped with double consoles and surgical simulators, are spread out across the 370 sq. m. of the brand-new experimental laboratory.

The acquisition of the IRCAD 2 facility was made possible through the support of local authorities (Alsace region, Departmental Council, City and Eurometropole of Strasbourg), who helped to fund the purchase of the building and rehabilitation works and contributed to 9.8% of the global budget.

The outstanding nature of the partnership between the IRCAD, Medtronic, and Intuitive Surgical truly contributes to the city’s and region’s economic development, and the IRCAD has become a driving force on the campus of Medical Technologies, aiming to attract an increasing number of industrials to the environment of medical devices.

As a leader in economic development, the Alsace region has made research and higher education its priorities. It is within this framework that the Alsace region undertook the renovation works of the IRCAD 2, which cost 750.000€.

In order to strengthen the scientific influence and attractiveness of the Alsace region, the region encourages top researchers to come to Alsace. In addition, the local community supports research projects which are part of a market with a high growth potential, identified within the S3 framework (Smart Specialization Strategy). This framework includes a laboratory, a local company and numerous scientific demonstrations. The Alsace region also provides postgraduate fundings, allowing research centers to develop research projects in fields considered a priority by the Region.

One of the objectives of the 2015-2020 State-Regional Plan Contract is also to develop the attractiveness and competitiveness of the region. As part of this contract, the Alsace region provided 254 M€ of the total cost of 835.8 M€ (with more than 76 M€, dedicated to higher education, research and innovation). Consequently, numerous design and construction works related to research development were undertaken this year. Strasbourg’s Research Institute in Biomedicine, the “Mix Surg” University Hospital Institute and the Institute of plant molecular biology are examples of this.

In 2015, the Engineers Pact 2 was also established. This new version meets the need to develop higher education and research internationally, as well as companies’ requirements within the context of regional economic development, innovation and internationalization.

This year, the Alsace region will dedicate a budget of more than 19 M€ to research and innovation. The region also manages the European Regional Development Fund (ERDF) and mainly finances innovation, knowledge-based economy and the sustainable development of territories.

Given its major role in the economy, in Higher Education and in Research, the Departement leads an ambitious proactive policy in supporting research programs throughout Bas-Rhin, and particularly in the Eurometropole. As a result, 750,000€ were brought in to allow for the acquisition of the IRCAD 2 facility and its rehabilitation.

For more than 25 years, the Departement has played a strong role in promoting the potential, attractiveness, and reputation of University and research activities in Strasbourg and to encourage innovation and technological transfers for companies across the territory.

This commitment, as a relay for the State-run action, is congruent with the action led by other Alsacian authorities, within the framework of great contractualizations such as State-Regional Plan Contracts (CPER), Triennial Contracts “Strasbourg, European Capital”, the Campus Plan, the “Investment for the Future” program.

As a result, over the last decade, more than 56 million Euros have been invested by the Departement in order to build and renovate university facilities, to finance scientific equipment purchases, to improve housing conditions and meal services for students, and to attract internationally recognized researchers.

For 2015, the departement authorities planned a budget of more than 18.5 million Euros to develop the economy, Higher Education, and research.

The campus of Medical Technologies, a major economic project on a territorial level, awarded by the French Tech label.

Launched in 2012, the campus of Medical Technologies results from a scientific, medical, and technological cooperation in the field of healthcare on an international scale. Located in the core of Strasbourg’s University Hospital, it aims to create a world-class ecosystem on the market of medical devices in order to improve patient quality of life and promote a strong economic attractiveness for the Eurometropole.

The scientific and medical excellence, recognized by three Nobel Prize laureates who are still professionally active, the creation of the Institute for Minimally Invasive Image-Guided Surgery run by Professor Marescaux, and the new teaching hospital all demonstrate that it is key to capitalize on knowledge-based economy, which truly is an important driver of economic activity and growth. The site’s reputation at cross-border and international level allows to link research, healthcare, and training skills and to facilitate the implantation of major corporate groups as well as the creation of startup companies. In addition to the implantation of world Industry leaders (Medtronic, GE, Karl Storz, Siemens, etc.), the valorization of the MedTech campus will allow Strasbourg to differentiate itself from other European medical poles, hence defining a vision for the future. At present, 1,000 jobs have been created and more than twenty startups settled on the campus. The French Tech incentive has become aware of this strong cooperative dynamic and rewarded the IRCAD with the valuable French Tech label in the field of excellence applied to medical technologies.

Being awarded the French Tech label and integrating the French team highlights the international support startups can benefit from to compete with American giants.

French Tech also represents an allocated budget of 200 million Euros in co-investments via the BPI, a public investment bank, to accelerate the growth of French startups, and a budget of 15 million Euros dedicated to the development of international attractiveness. The French State will mobilize such funds within the framework of the “Investing for the Future” program.