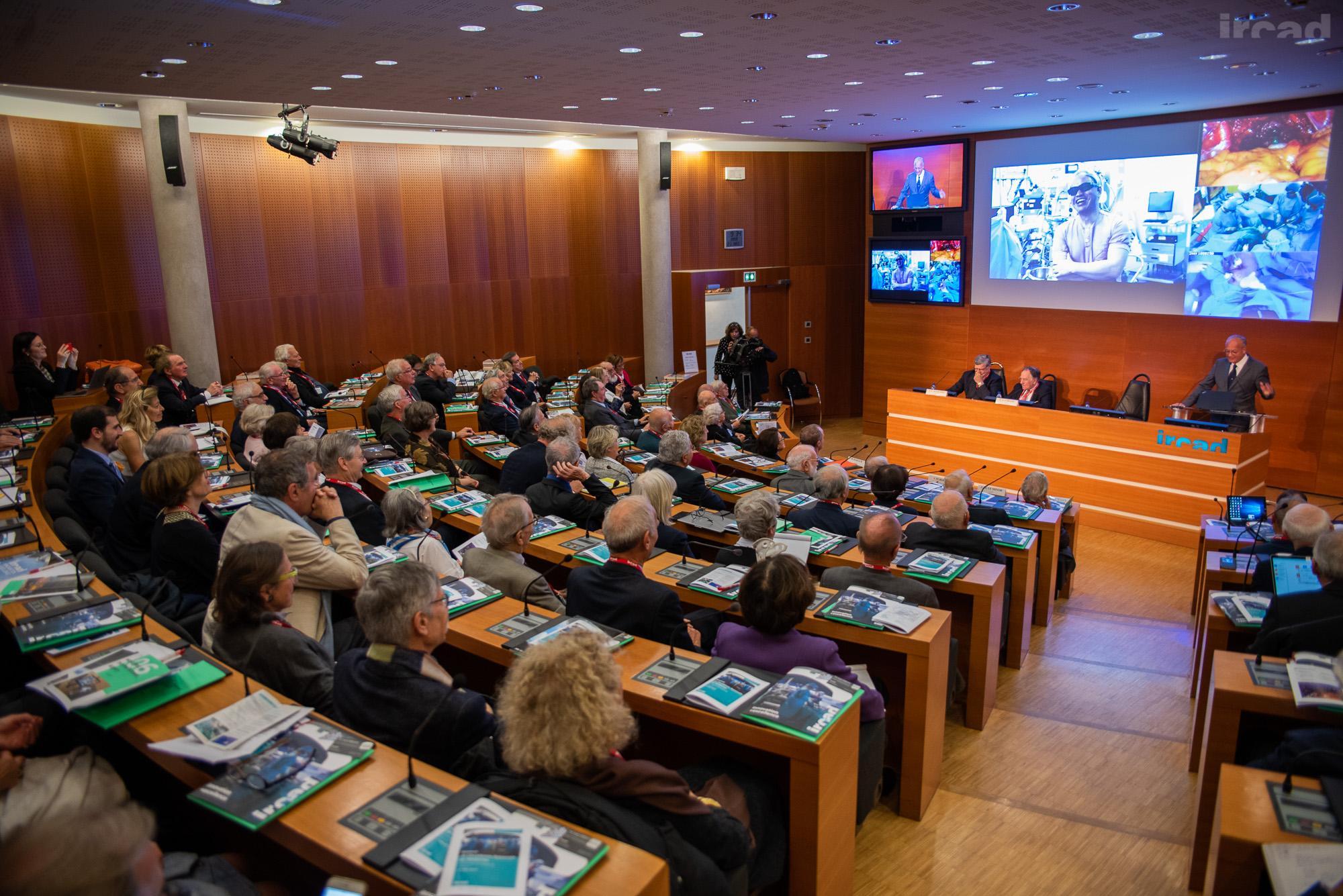 IRCAD welcomed the National Academy of Medicine to Strasbourg for a delocalized session which was held on an exceptional basis, yesterday within the IRCAD premises and which gathered around 100 academicians and leading experts along with 3 former health ministers, namely Michèle Barzach, Philippe Douste-Blazy, and Jean-François Mattéi.

Thirteen years later, he once again chose the IRCAD institute, an internationally recognized center of excellence in minimally invasive surgery. “Prof. Jacques Marescaux is now a world-renowned figure, from Rio to Kigali, and from Strasbourg to Taiwan, and he won’t stop there. Rumor has it that his new endeavor “Nextmed”, with the collaboration and know-how of Ms. Catherine Trautmann, Vice-President of the Eurométropole de Strasbourg, has begun!” Prof. Cabanis has revealed.

Prof. Jacques Marescaux, IRCAD’s Founder and President, was entrusted with the design of this exceptional session’s scientific program.
Distinguished experts such as Philippe Douste-Blazy (Former French Minister, UNITAID President, Under-Secretary-General of the United Nations), Jacques Lewiner (Physician and inventor, Honorary Scientific Director of the City of Paris Industrial Physics and Chemistry Higher Educational Institution), Arnold Munnich (Founder and director of the medical genetics department of the Necker-Enfants Malades hospital in Paris, President of the Imagine Foundation), and Dominique Pon (appointed by the French Health Minister, Agnès Buzyn, to supervise digital transformation in healthcare) gladly accepted his invitation to participate in this event, and to share their views on artificial intelligence, technology transfer and digital transformation in healthcare.

The session started at 1:45 pm with an introduction speech given by Prof. Emmanuel-Alain Cabanis and Prof. Jean-François Allilaire, Perpetual Secretary of the National Academy of Medicine. It was then followed by lectures and discussions (see the program below).

This was a major event for IRCAD as it demonstrated the recognition of the research which has been conducted by the institute for the past 25 years by the French medical community.

Program of the delocalized session

2:00 pm          History of the Nobel Prize winners from Strasbourg – M. DENEKEN, President of the University of Strasbourg

2:10 pm          Is health a universal common good? What France can bring to the table – Ph. DOUSTE-BLAZY, Former French Minister, UNITAID President, Under-Secretary-General of the United Nations

2:40 pm          Artificial intelligence and healthcare: a dystopia or a promising future? – B. GALLIX, Professor of medicine, Strasbourg/France – McGill/Canada

3:40 pm          True progress means sharing – A. MUNNICH, founder and director of the Department of medical genetics of the Necker-Enfants Malades hospital in Paris, President of the Imagine Foundation